I’ll try; first I have to lance the blackness.

It’s really, really, difficult to be in the moment when you’re living your life; studying, working (meeting deadline after deadline), dealing with demands of managers and tutors who really have no idea of you other than a part of a process, a tool, a means to an end. It’s difficult when you’re being a partner, mother, friend, daughter, sister; the star at the centre of your own universe. I’m no good at physics so it’s likely that my analogies here are all completely wrong; suffice that they draw a picture to give some meaning to the words. This semester I’ve slowly and without even knowing it watched myself  be pulled, pushed, moved inexorably towards a black-hole. It’s happening as I type and I don’t really know how to stop it; I don’t know how to start shining again.

I’m told I don’t need to understand why but rather I need to learn the tools to stop the pull of the black hole; the intrusive voices; the deep unworthiness and the supreme knowledge that it would be better if I was not here but in there; it would be better if I just gave in.  Naturally giving in is not really in my nature so while I wait for help with the ‘tools’ – the lone x-wing combat fighter battling against the immutable deepest purest blackness –  I pull away; I push against the force pulling me towards the black hole and it’s exhausting, it’s deeply, deeply exhausting.  I’m too heavy and it can find me and suck me in.

I feel that pull every morning when I wake up and face the fact that I have to get up; it’s expected of me, I have to go to work, I have to attend lectures (at least the ones where the lecturers aren’t on strike – black holes come in different forms); I have to continue being a partner, mother, friend, daughter, sister. I never knew how hard it could be to just get up; how exhausting to drive to an office where I’ll be assailed by more demands all without the support of fellow fighters who are all busy fighting their own battles.  I don’t know when work stopped being a bright joy, a challenge, an opportunity, a time to learn and risk supported by the like-minded people who wanted to help you be the best you could be.  But it did. I think I may be lying, at least not disclosing all I could, I do know for me when it happened, when I stopped believing that the person mattered; that I mattered. Although what I did was nothing special it shone because it was valued; I was valued. Bullies are enabled by process and they’re rather like small black holes; they suck all the life out of everything until all that is left is themselves.

One morning I woke up and knew I couldn’t resist the siren call of the black hole alone. It’s hard making that decision to ask for help, to speak to someone, anyone and describe even a part of the blackness that is calling.  It’s a failure if you can’t cope. Even though you may have always known within yourself that it isn’t; the moment you speak out against it you know you have failed. You know that you’ve given the blackness more power over you.  You know that thoughts and feelings aren’t facts but you don’t believe it.  You’re now part of a process and processes are designed to run smoothly; they can’t dig in and push back against the pull of the black hole.  Am I real? I feel like I’m just part of the machine, the process?

Those who try to help and those who don’t: at some point their actions create the same reaction. The reaction of the process.  There is an eight week wait before I can see the CBT therapist and there is no point seeing the psychiatrist before you’ve had CBT because it is the first thing the psych will do so ‘we’re saving time by doing it first’. Don’t worry you’re in the process now.  You’ve been off work 28 days continuously now so work need to speak to you at this time every week to see how they can help you; on top of that you have to meet face to face with your line manager urgently. It’s all part of the process. The process of sucking you closer and closer to the black hole. Don’t worry you’ll be at the edge soon. I’ve failed again; why did I ask for help, why didn’t I just keep on pretending?

The process is actually lots of small processes none of which interact with each other.  They follow the conveyor belt smoothly to their ultimate end without ever willingly or knowingly considering all the other processes. I’m pulled along by different processes all at different stages – for the medical/GP/psychiatric process I’m here (6 weeks to go until the start of CBT). For employment I’m here (4 weeks in so I have to see them and speak to them about where I am). I’m here. I’m stuck between two processes that want to help but in ignoring each other at this place, at this time, here and now are both helping me towards the blackest, darkest hole I’ve ever seen.

There is light, there is hope, there is help to push back the darkness.  University, at least, offers what appears to be a person (rather than process) focussed system. Asking for help there suggests hope, a new dawn even. The system/process manages the needs of individuals/people rather than the needs of people being managed by a process. So I’m here.  Mitigating circumstances have been accepted; I can breathe. I can make a brew. I can focus on the taste and watch the steam dance. I can take a break from the inexorable processes which pull me staggeringly towards blackness. In that space I can hear and feel the support of others; my own alliance. An alliance created by asking for help. Who knows you need help unless you ask for it? 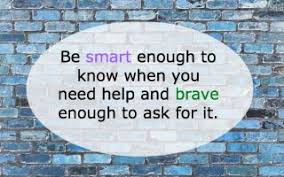 Facing the blackness alone is not the most difficult thing to do. As a very wise person told me “asking for help is the hardest, bravest, thing to do. Accepting that we need to let someone else in, even when we feel we don’t want to”. The struggle is not over now I’ve asked for help; it goes on in almost every thought I think (“thoughts aren’t facts”) and action I do; in every choice I make.  I choose to write this blog and print it.

I cannot choose how you will react to it, to me.  That’s not actually its purpose.  It is another little X-wing fighter in my battle against the pull of the black-hole.